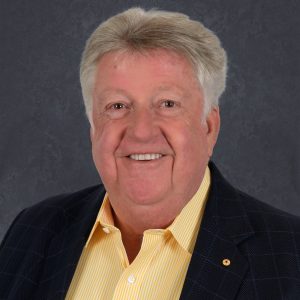 Born in Brisbane, Queensland in 1951, Denis was educated at St Joseph’s College, Gregory Terrace, Brisbane. Denis started with the Australian Record Company (now Sony Music)in May 1970in the Distribution Division in Brisbane, making him the longest serving global Sony Music employee. In 1976 he moved to Sony Music’s head office in Sydney and held a number of senior positions including National Promotions Manager, Director of Marketing and General Manager, Marketing and Sales.

Denis was appointed Managing Director and Chief Executive Officer of the Australian company in 1984. In February 1996, he was made Chairman, Sony Music Entertainment Australia Limited and appointed to the international committee responsible for the company’s global strategy. In 2002, Denis was appointed to chair the Sony Music International Strategy committee which identified new business and product directions.

In September 2010, in addition to his Australia and New Zealand responsibilities, he was appointed President, South East Asia & Korea, including managing the day-to-day operations of the Asian Regional Office located in Hong Kong. In August 2011, Denis’ role was further expanded as President, Asia.

Since Denis became Chief Executive in 1984, Sony Music (previously CBS Records) has successfully expanded into many new areas such as video games, music publishing, DVDs and CD manufacturing, digital & online portals, merchandising and television & content creation. More recently, the company has diversified into touring & events, artist, sports and media personality management and branded entertainment projects. Sony Music has consistently been one of the top performing music companies globally and on a number of occasions Sony Music Australia was the top performing international affiliate of Sony Music.

In May 1996, Denis became the first Australian and the first Sony Music Entertainment executive to be honoured with the CEO Special Recognition Award presented by Sony Chairman and CEO Norio Ohga. The award is presented annually to the one Sony executive worldwide who has achieved unique or extraordinary results in their professional activities. Senior executives from all of Sony’s operating groups can be nominated for the Award. In that year, 147 executives were nominated, from which 21 finalists were drawn.

Denis has a deep involvement in the music industry. He has served on the committees of several industry associations and has held various positions including Chairman of the Phonographic Performance Company of Australia, Vice Chairman of the Australian Recording Industry Association (ARIA) and Chairman of the ARIA Industry Chart Committee. Denis has been a member of the ARIA Board since 1984 and held the position of Chairman of ARIA for an unprecedented ten consecutive years. He was reappointed ARIA Chairman in September 2010 and continues to hold that position.

Outside of the music industry, Denis is strongly committed to community work and is a founding member of the Sony Foundation of Australia which has raised over $31 millionsince 1998 for youth based charitable causes. His community work has also included Board positions and major fundraising for the Children’s Hospital Westmead, Parkinson’s Syndrome Society and a number of other important charities. Denis was appointed as a Patron of the Youth Off The Streets scholarship program in its inaugural year in 2004 and is an inaugural Board Member of the Ricky Stuart Foundation which was formed in 2012 that raises funds to establish awareness and services for autism.

Denis has also been a mentor of the Queensland State of Origin rugby league team since 2006, during which the team achieved unprecedented success of 11 Series wins.

In the Australia Day Honours List in 2005, Denis was awarded the Member of the Order of Australia (AM) in recognition of:

“service to the music industry, particularly through the promotion of Australian musicians, to professional organisations, and to the community through fundraising for charitable organisations”.

In the Queen’s Birthday Honours List in June 2017, Denis was elevated to and awarded the Officer of the Order of Australia (AO), in recognition of:

“for distinguished service to the Australian recording industry, through leadership and mentoring roles, as a supporter of young artists, and to charitable organisations as a director, patron and contributor”.

On June 23, 2009, Denis received the Ted Albert Award for Outstanding Services to Australian Music from the Australasian Performing Right Association (APRA). This prestigious Award is chosen by the APRA Board of Songwriters and Music Publisher Directors.

In April 2012, Denis received the ‘Label Executive of the Year – Major’ award from the Worldwide Radio Summit Industry Awards held in Los Angeles. The Summit covers a number of award categories which are voted on by peers from radio and the industry in the US and around the world.

Denis was awarded the ARIA Industry Icon Award by the ARIA Board in November 2014. The award was presented to him at the 2014 ARIA Awards Chairman’s Cocktail Party by his long-term friend and industry colleague, Molly Meldrum, and Sony Music artist, Jessica Mauboy. The award is made in recognition of Denis’ outstanding contribution to the development of the Australian music industry, in particular Australian artists and industry copyright and reform matters.

In May 2017, Denis as a Sony Foundation co-founder, accepted on behalf of the Sony Foundation, a special award at the Sony Annual Management conference in Tokyo. The award was presented by CEO & President of Sony Corporation, Kaz Hirai, and recognised the Foundation’soutstanding contribution achieved from fundraising events to the benefit of the community and charitable causes through its programs, employee engagement, collaboration with business partners, Sony Music artists and ambassadors.

Denis has been married to his wife Jan for longer than he has been leading Sony Music. They married in 1977 and have six children.