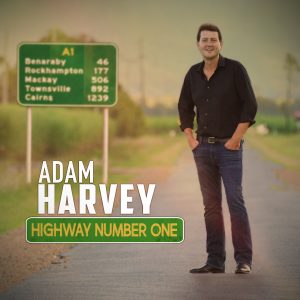 Today, acclaimed country music star Adam Harvey has released his latest single‘Highway Number One’ through Sony Music Entertainment Australia. To coincide with the single, the official music video was also released today.
Listen to the single here | Watch the video here
Inspired by his years touring around the beautiful country he calls home, the multiple ARIA Award nominee and 8 time Golden Guitar winner wrote ‘Highway Number One’ about the joys travelling can bring. Speaking on the track Adam says, “ I’ve toured right around the country, across it, up and down it, every which way you could possibly go and I’ve been lucky enough to do that for over 20 years. There is a feeling of freedom when you’re constantly on the move, it’s really amazing and very addictive. I thought if I write a song about it, it might connect with people on the roads, it might also encourage people to take the leap, buy the caravan and explore this amazing country as you travel along Highway Number One”.

Stepping into the shoes of the producer for the first time, recording ‘Highway Number One’ was a completely new experience for Adam, “Going into the studio was pretty daunting at first I must admit, but I really enjoyed the process”. When producing and mixing the record, the country veteran went in with a clear vision for the direction of the sound, “I knew what I wanted to say and exactly how I wanted it to sound. I had this whole concept in my mind and that made it very easy not to get side tracked or lost”.

Getting off track outside of the studio, however, was definitely on the cards for the nomadic Aussie who embarked on an adventure of his own to shoot the official music video. In the video clip Adam ventures north, meeting locals and fellow travelers who share his love of the open road before arriving in Bundaberg where, of course, a trip to the iconic Bundaberg Rum Distillery had to be done. Commenting on the filming of the video, which is directed by award winning producer/director and longtime friend Duncan Toombs, Adam remarks, “The whole experience felt more like a boys getaway! To be honest I have never had so much fun recording a video clip”.

‘Highway Number One’ follows the success of his most recent albums The Nashville Tapes, Harvey’s Backyard Bar, The Great Country Songbook Volume II and Family Life and is the first sip from his forthcoming album set for release later this year.