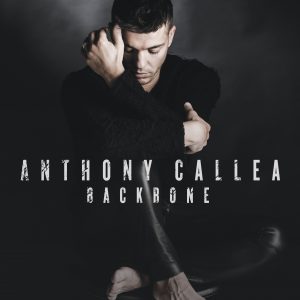 Acclaimed vocalist Anthony Callea is ready to take the covers off the essential playlist for this spring and summer, as he releases his sixth album, BACKBONE on September 16th through Sony Music Entertainment Australia.

On BACKBONE, Anthony gets to the heart of some of his favourite songs from the ‘80s and ‘90s with his unique and utterly flawless take on classics like ‘Fantasy’ from Blackbox, TLC’s ‘Unpretty’, ‘King of Wishful Thinking’ from Go West and Pat Benatar’s anthemic ‘We Belong’.  The album also contains an original composition, the title track ‘Backbone’, which Anthony wrote while in L.A earlier this year.

“I spent two days in the studio with Damon Sharp and I know it sums up what we’re trying to say with this album. In any relationship, the core and backbone comes from truth, honesty, love and respect. Just like music, if a song has a great melody, lyric and communicated with truth, honesty and respect, it will stand on its own and its backbone and core will be exposed,” he says.

Discussing his song selection, Anthony explains, “They’re songs that I grew up listening to and loved, but when you listen to them carefully, you realise that they have so much more under the surface, iconic melodies and brilliant lyrics that are sometimes overshadowed by the bells and whistles in the production. I really wanted to draw focus to the essence of these songs, record them organically with real instruments and with no sequenced tracks whatsoever. It was all about communicating the story of these songs with honesty and delivering them in a new and unique light.”

In order to get right to the core of the songs, Anthony and producer James Roche started in a room with a grand piano, stripping the songs right back to basics and then layering them up again into stunning arrangements.  The result is an album of hits filled with warmth, maturity and familiar tracks that will resonate widely – as Anthony says, “There is something really beautiful when you find new meanings and messages in songs you have always loved.

“This definitely was the case with me when I was recording BACKBONE and I know that many of these songs, in this new light will surprise many as well. Shake up an espresso martini and enjoy the album.”

BACKBONE is the next chapter in an enormously successful career, which launched in 2004 through Australian Idol ahead of the release of his debut single, ‘The Prayer’.  ‘The Prayer’ became the fastest-selling single by an Australian artist with sales in excess of 4 x platinum and an incredible 5-week ARIA Singles chart-topping run. His 2005 self-titled release claimed double-platinum accreditation and held the ARIA Album chart Number 1 position for 3 weeks.

Since then, Anthony has developed a reputation as one of Australia’s leading vocalists, playing countless live shows across the country alongside some of the world most talented vocalists including Celine Dion, Whitney Houston, Diana Ross and fellow Aussie Tina Arena.

To celebrate the release of Backbone, Anthony will tour the country, with a selection of dates in place and more to come.