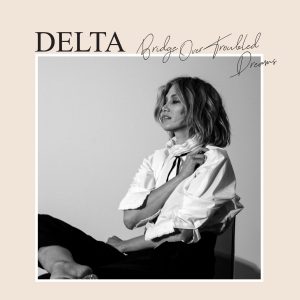 Over her 20-year career, Delta has amassed a multitude of hits and achievements. The gifted singer, songwriter & performer has achieved in excess of 18 x platinum sales, 8 x gold sales, 9 #1 singles, 17 top 10 hits, 12 ARIA Awards, a Silver Logie Award & 3 World Music Awards, and now, her fifth #1 album, meaning cross her entire catalogue of releases, Delta now has 69 ARIA accreditations. This achievement now means that Delta has had a #1 album in three different decades – 2000s, 2010s and 2020s!

BRIDGE OVER TROUBLED DREAMS has had both fans and critics alike applauding this new era of music, with Cameron Adams from News Corp stating “Here Delta follows her heart not just the chart – always the right choice”, Retro Pop Magazine affirming “As a singer, Delta’s voice is as pure and clear as ever before, but it’s in her songwriting that the star excels herself”, Stack Magazine confirming “But this album is surefooted and superb, with Goodrem successfully veering from pop to ballads, gospel and even a country-tinged detour” whilst auspOp states “I’ve got nothing but respect for her vision and drive. Her fans are right there alongside her for the ride.” Also released last week in conjunction with her album was Goodrem’s first ever book, Bridge Over Troubled Dreams, which she has achieved the #1 spot on Non Fiction, # 1 on Adult Titles, # 1 on Biographies & Autobiographies,  # 1 on Bestsellers by Value books and # 1 on Australian Originated Non Fiction charts.

Delta commented; “I am so proud of this album – and to now have my fifth number one album is a dream come true. It’s a testament to my incredible fans, who are the most loyal champions I could ever wish for and for that, I am forever grateful. Thank you must also go to the support of Denis Handlin and Sony Music Australia, who have stood by me for the past 20 years. I am so humbled by the support and love that I’m feeling today celebrating this truly special moment. I can’t wait to share these new songs with everyone on my tour later this year.”

BRIDGE OVER TROUBLED DREAMS
OUT NOW