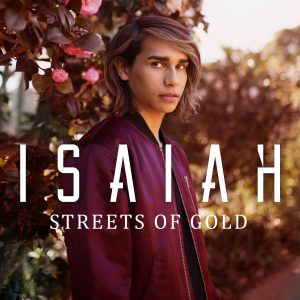 Hailing from the small country town of Moama, on the border of Victoria and New South Wales, the 17 year has already achieved more in his career than most would dream of in a lifetime, displaying his sheer determination and passion for music.

Isaiah’s debut single ‘It’s Gotta Be You’ surpassed 100 Million streams on Spotify this month and has been certified Platinum in Sweden as well as Gold in Australia, Norway, and Denmark. Earlier this year, Isaiah represented Australia in the 2017 Eurovision Song Contest with his song ‘Don’t Come Easy,’ placing 4th in the final jury vote & 9th overall, winning hearts and fans around the world.

“I’m so glad I’ve got the opportunity to share ‘Streets of Gold’ with you all,” explains Isaiah. “I’m really proud of this song and it means a lot to me. I wrote this song with Neil and Steve (two incredible songwriters) and in many ways it represents all that has happened to me in the last 12 months. I think people will relate to the message ‘there’s no place like home’. I hope you love ‘Streets of Gold’ as much as I love singing it. Thank you, I feel truly lucky to have all the support I have, and look forward to performing it for you! “

Isaiah has performed for massive audiences in recent weeks, including a national tour alongside Australia’s sweetheart Jessica Mauboy as well as a national anthem performance on ‘The Battle of Brisbane’, a record-setting boxing event broadcast across 32 countries with a 1 billion+ viewership.

Next up, Isaiah will perform an exclusive homecoming show at The Ulumbarra Theatre in Bendigo on Sunday 06 August. Tickets available now from https://www.gotix.com.au