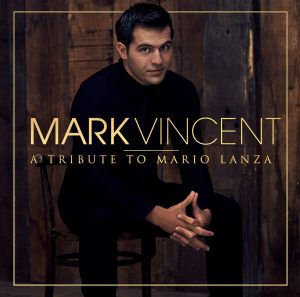 Following the success of his duet album TOGETHER with Marina Prior, and off the back of being awarded Best Male Vocal of the year at the 19th Annual ACE Awards, young Australian tenor Mark Vincent focuses his attention to the rich repertoire of songs and arias made popular by the great Italian-American tenor and actor Mario Lanza with his new release on Sony Music Entertainment Australia, A TRIBUTE TO MARIO LANZA.  This tribute album, which is available tomorrow, Friday April 14th, was produced by Chong Lim and features world-class musicians of the Sydney International Orchestra conducted by Guy Noble.

Like many other tenors, Mark discovered Mario Lanza through the film, The Great Caruso. Mark describes that moment, saying, “Throughout the whole movie I was in awe and struck by the incredible beauty of operatic singing and the urgency and intensity of his voice. It has been a life-long dream of mine to record an album as a tribute to an artist who was an inspiration to many modern singers including The Three Tenors, Andrea Bocelli, and even Elvis Presley. I am so proud to be the first Australian tenor to have recorded this album.”

Ellisa Lanza Bregman, Mario Lanza’s daughter, has given her imprimatur to Mark and the album, “As the trustee of my father’s legacy, his reputation, and his memory, I’m pleased to allow his recorded voice to be joined on this historic recording by the exciting young Australian tenor, Mark Vincent. Like all artists, tenors are competitive, but they share a special bond: a heritage that goes back to Caruso and a mutual acknowledgement of the artistic links that influenced their careers. Mario Lanza, my father, also grew up listening to Caruso‘s recordings. Eventually he came to be compared to him. Mark Vincent, I wish you every success and I know that this unique recording will be sought after and cherished by music lovers everywhere.”

A TRIBUTE TO MARIO LANZA features a virtual duet where Mark sings alongside his idol in ‘Because You’re Mine’, one of the legendary star’s biggest hits. Re-mastered and re-edited, the song, from the MGM musical of the same name, is given a fresh and brilliant new dynamic with the addition of Mark‘s rich tenor tones. Mark Vincent currently appears live on stage in Dame Julie Andrews’ production of My Fair Lady, touring Brisbane and Melbourne this year.