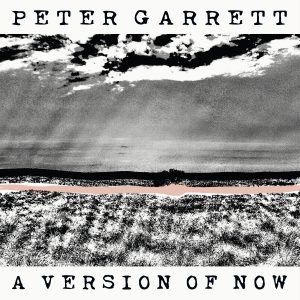 Feel the air move under the weight of the electric bass, the truncheon ring of the rhythm guitar, the sheer purpose in the singer’s invocations of unyielding nature and boiling human passions. Yeah. Peter Garrett’s back. It could not be anyone else.

Tall Trees is the first taste from the Midnight Oil singer’s first ever solo album, A VERSION OF NOW, an album made “almost by accident”, and in the space of a few short weeks, as he looked back on a remarkable journey through music, activism, politics and family for his 2015 memoir, Big Blue Sky.

“The guitar had been sitting in the corner looking pretty forlorn,” Garrett says, after his decade as the Labor member for Kingsford Smith. “Towards the end of writing the book, I started to feel like an invisible hand was directing me across there and a few little melodies and themes started to pop out.”

The lyrics of Kangaroo Tail had appeared at the front of chapter one, “almost like an opening poem”.

At the end had landed I’d Do It Again: an unflinching summation of an era buffeted by frustrations and imperfections but redeemed by the unwavering conviction “to try and do what’s right”.

“Writing enabled me to put down my version of the past, while at the same time providing all of this other space for the subterranean passions of music and songs to break through to the surface,” he says.

“It was a combination of churning up the soil of the past and having enough acreage to let the songs land and do the job.”

A couple of other seeds had been around a while. Great White Shark originated years ago with Oils guitarists Martin Rotsey and Jim Moginie. Homecoming bears the co-credit of that band’s bassist Bones Hillman, though the notion of what home means in a world of fraught migration contrasts with Garrett’s own gratitude for rediscovered domestic bliss.

For those who know Midnight Oil as a collective front driven by big-picture visions, the more intimate songs of personal devotion and commitment might be more surprising. Only One and Night & Day are the natural fruits, Garrett says, “When you sit down with your head and your heart alone in a room. I didn’t think that much of it. I just let it happen.”

Which neatly expresses the impulse behind the album and its execution. “When I realised the songs were coming,” he says, “I just thought, I’ll take whatever the idea is — and they’re pretty simple songs — and just figure out a way of making it work for me. I’m a big believer in grabbing the moment and not losing the spark that you first see.”

In an echo of a process going back decades, it was a trip to the outback that fanned the flames of the project. Between the stars and the red dirt campfires of the western desert, Garrett played Rotsey his first few ideas and found the encouragement and a trusted sounding board to push forward.

There was no intention of assembling a supergroup spanning several generations of Australian rock. But by the time they convened for two weeks at Garth Porter’s Rancom Street Studios (“in my old electorate,” Garrett notes with a characteristic taste for poetry in action), that’s kind of what they had.

An appreciation of Courtney Barnett and The Drones’ records cemented engineer/ producer Burke Reid. The powerful keyboard component of The Jezabels led to a call to Heather Shannon. Garrett picked Mark Wilson’s sinewy bass from a collection of new music that came his way. Jamie Hutchings from Sydney outfit Infinity Broke added guitar to several tracks. RocKwiz drummer Pete Luscombe was the pro all-rounder who could lay the beats down fast.

With the crunch of Oils guitarist Martin Rotsey at his back and his three daughters singing back-up, the tone is both distinctively strident and unexpectedly tender as one of our most thoughtful, deliberate artists reflects on the world inside and out to find his resolve – surprise –­­ utterly unbowed.

Garrett points to the smoldering intent of the final track, It Still Matters, to illustrate the band’s potency. “Obviously musicians of this calibre will get to the point pretty quickly, but in this case it was really exciting. By the time you finish mixing you realise it’s all there. You’ve really got to bank those ones when they happen. They don’t come along every day.”

Ultimately, it’s this crucial element of spontaneous expression that gives the album its very breath. After a decade of public service at the highest level, A VERSION OF NOW answers to nothing but the artist’s pact with inspiration.

“It’s not like I’m trying to erase my history. It’s not a set of deadweights around me,” he says. “I just had to be prepared to go with whatever the artistic impulse was and let the world make of it what it will.

To me, it feels like metamorphosis. We’ve all got creativity in us but it’s inevitable that when we start working in a very structured and disciplined environment, that gets submerged for a time. When the chrysalis opened for me, it turned out to be my love of music that emerged and I’m grateful for that.”

A homecoming in so many ways, A VERSION OF NOW is simultaneously the work of a new man and the artist we’ve always known, as songs of gratitude and dissent, high passion and staunch resistance collide, as always, with a steely eye on a better future.