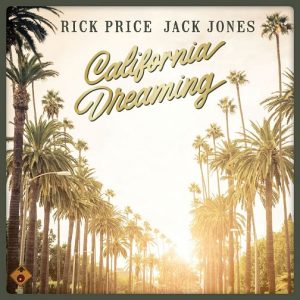 A tribute to the west-coast California sounds of the 60’s & 70’s has been beautifully recorded by Australian music legends, Rick Price and Jack Jones with Rick at the production helm. Both Rick and Jack share a common love for the music of the period and were both equally enamoured by the idea of paying tribute to some of the greatest artists and songs of the 20th century.

Recording the twelve track album in Nashville at his home studio, Rick talks about making the album, saying: “I felt we needed to pay homage to these songs and be respectful to the melodies and arrangements and not drift too far off the reservation. But, at the same time we wanted to add some things here and there that made a difference”.

With Jack adding: “Rick and I have been talking about doing something for close to two decades… it was a great opportunity to work together and celebrate great artists, some great songs and a certain time and genre. That period in music will never be repeated again.”

Following on the back of their recent ARIA Chart success with CALIFORNIA DREAMING – No. 7 on the Albums Chart and No. 1 on the Australian Album Chart – acclaimed singer songwriters Rick Price and Jack Jones are thrilled to announce they’ll embark on a national tour in May 2018 to celebrate this amazing songbook!

The tour will commence in Brisbane on Thursday May 3, followed by Gold Coast, Wollongong, Tamworth, Narrabri, Adelaide, Geelong, Melbourne, Sydney, Canberra and concluding in Newcastle on May 27. Tickets go on sale 12 noon on Friday November 10.

A tribute to the west-coast California sounds of the 60’s & 70’s, CALIFORNIA DREAMING has been warmly embraced, fans revelling in the selection of songs from the period from the likes of The Mamas And The Papas, Linda Ronstadt, Neil Young, Jackson Browne, Eagles, The Doors, Joni Mitchell, James Taylor, The Byrds, Crosby, Stills, Nash & Young.

Rick and Jack are excited to hit the road together to play these songs live, Rick Price saying today, “We have been blown away by the reaction to the album and how these songs and our take on them, have resonated with the public.  It’s an amazing opportunity to showcase them on a big stage, with a phenomenal band, in such a vast spread of locations.”

Catch Rick Price and Jack Jones, touring together for the first time, on the

Tickets on sale at midday on Friday November 10 from Ticketek

Rick Price and Jack Jones are no strangers to chart success as individuals. Price’s resume includes his classic Platinum selling debut, HEAVEN KNOWS which spawned the hit single ‘Not A Day Goes By’. Price has lived and worked in Nashville since the mid-nineties, working with everybody from Tina Arena to Mitch Grainger. Other solo albums include ANOTHER PLACE, THE WATER’S EDGE and TENNESSEE SKY.

Price’s relationship with Jack Jones goes way back. Jones first caught the attention of Australian radio with his band The Southern Sons in 1990.  The band’s self-titled debut album hit double platinum and spawned three top-top hits, ‘Heart In Danger’, ‘Hold Me In Your Arms’ and ‘You Were There’. 1992’s follow-up NOTHING BUT THE TRUTH shot into the Top 40 and was followed by ZONE in 1996. New York City based Jack also performs under his birth name, Irwin Thomas. His other work includes his involvement in Electric Mary, a slew of acclaimed solo singles and his much lauded debut platter, THE EVOLUTION OF IRWIN THOMAS (2002).