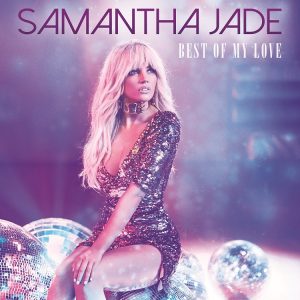 AN HOMAGE TO THE DISCO ERA + TWO GLITTERING DISCO-INSPIRED ORIGINALS

Australian pop darling Samantha Jade is set to release her third studio album BEST OF MY LOVE on April 20th through Sony Music Entertainment Australia.BEST OF MY LOVE is a shimmering homage to the disco era, filled with tributes to iconic greats such as Donna Summer, Gloria Gaynor, Cher, Diana Ross and many more, and is available for pre-order NOW. Fans can also pre-order an autographed copy of Jade’s “Collector’s Edition” on her webstore, featuring a gorgeous full-colour photo spread and autographed CD product packaged within a vinyl sleeve.

The first single and title track ‘Best of My Love’ is available today to stream and download – listen HERE. ‘Best of My Love’ is a contemporary interpretation of The Emotions’ 1977 smash which perfectly embodies the overarching themes of optimism, positivity and female empowerment within the album.

As many contemporary artists alongside Samantha Jade can attest, the disco era kick-started the modern era of dance-based popular music that still exists today.BEST OF MY LOVE journeys through some of the pinnacle moments in this life-changing era, from ABBA’s ‘Dancing Queen’ (1976) to The Bee Gees’ ‘How Deep Is Your Love’ (1977), to Gloria Gaynor’s ‘I Will Survive’ (1978) and Donna Summer’s ‘Hot Stuff’ (1979), as well as Diana Ross’ ‘Upside Down’ and ‘I’m Coming Out’ (1980). Check out the full track-listing below.

On BEST OF MY LOVE¸ Samantha Jade also pays homage to some of the ground-breaking songwriters and producers behind the hits, including Bernard Edwardsand Nile Rodgers of Chic, Giorgio Moroder and Clifton Davis.

Samantha comments on the record, “BEST OF MY LOVE was such a fun record to make.  I hope it reignites the passion for all disco lovers and helps tell the story of this exciting genre to a whole new audience that may not have experienced the lifestyle first-hand. It’s such an honour to pay tribute to some of the most iconic divas such as Donna Summer, Cher and Diana Ross. I’ve always been inspired by disco, soul funk and dance, particularly the female voices that emerged during this time.

Samantha Jade Announces Her Forthcoming Album ‘Best Of My Love’