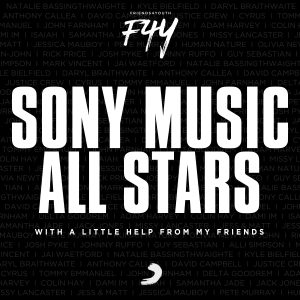 Sony Music Australia is proud to announce that 29  Sony Music All Stars have come together to record a very special version of The Beatles’ classic ‘With A Little Help From My Friends,’ for Sony Foundation. ‘With A Little Help From My Friends’ will be available to stream and purchase from tomorrow, Friday October 27th, with all of the funds received by Sony Music  from the sale of this charity single donated to the Sony Foundation to support Australia’s most vulnerable young people.

Sony Foundation Australia’s Friends4Youth Campaign, inspired by the charity single, is fundraising to support life-changing youth programs. Funds raised will contribute to establishing youth cancer You Can Centres, support marginalised young people to go through the MMAD STAR mentoring program, ensure hot meals are served every night to the homeless via the Youth off The Streets van and fund the respite care for over 600 children with special needs at Sony Foundation Holiday Camps around Australia.

Australians can show their support by visiting www.Friends4Youth.com to download the single, buy exclusive merchandise and donate funds.

Denis Handlin AO, Chairman & Chief Executive Officer of Sony Music Entertainment Australia & New Zealand and President of Sony Music Entertainment Asia, commented, “I have seen, first hand, how Sony Foundation has positively impacted the lives of so many young people in this country and I am very proud to represent such an amazing roster of artists who have generously given their time for this special project.  Sony Music and our artists are so passionate about supporting these incredible young people who have been affected by youth cancer, disability, drug and alcohol addiction, homelessness and displacement. These kids are the unsung heroes and are such an inspiration to us all as they face their immense challenges.”

Sophie Ryan, Chief Executive Officer of Sony Foundation Australia, commented, “We never underestimate the power of music to heal and to change lives.  This special initiative will not only raise vital funds, but will also be a powerful message to the young people Sony Foundation supports, that they are not alone. They have Sony Music artists and our supporters, backing them and believing in them, working together to achieve positive change. We hope this single will inspire Australians to stand up and support our young people in need – those facing cancer, those struggling with homelessness, addiction and poverty and those with special needs. Let’s change the outcomes for these young people. ”

Sony Foundation Australia would like to thank Sony ATV Publishing who have agreed to generously donate the song royalties for this very special campaign.

ABOUT SONY FOUNDATION:
Sony Foundation Australia is the charitable arm of the Sony Group of Companies in Australia. Its aim is to capitalise on the unique qualities of Sony and contribute to the advancement of the Australian community by assisting its youth and fostering their talents. Through its fundraising and activities, Sony Foundation is affirming the global unifying brand message that drives Sony: believe that anything you can imagine, you can make real. Since 1998, Sony Foundation has raised more than $28 million for youth related causes.

Sony Music All Stars Align for Charity Single ‘With A Little Help From My Friends’ Out Now!